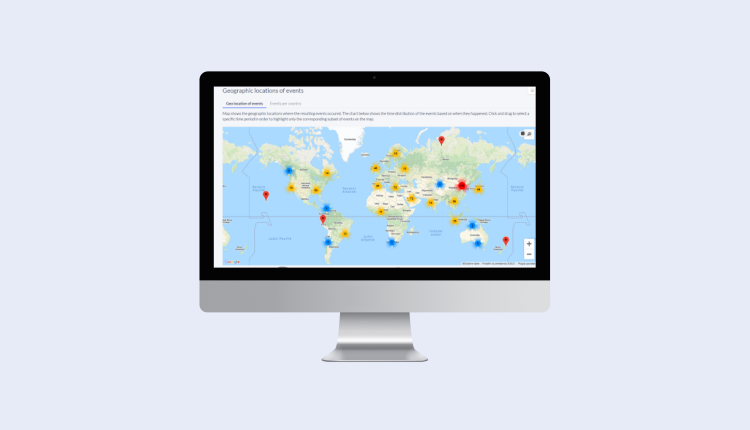 “AI in manufacturing” resonating in the news

Where does the topic of artificial intelligence in manufacturing predominate, what is the sentiment, and which subtopics are most popular in global media news? To address these questions, Event Registry, a global media monitoring platform developed by Jožef Stefan Institute, was used as part of the EU-Japan.AI project.

Event Registry is the world’s leading news intelligence platform, which keeps track of world events and global news and analyzes their impact. The system structures global news and enables to find, summarize and visualize news and blog content published globally by over 150,000 diverse sources. The platform works by advanced filtering by keywords, tags, categories, sentiment, location, and more. For example, since the beginning of this year 167, 478 articles were published addressing the topic of “artificial intelligence” and 95, 369 on “manufacturing.”

“AI in manufacturing” more popular in the US or Japan?

To answer the question, both the total number and the relative numbers of news relating to the subject are analyzed. Looking at the total number of articles related to the topic “Artificial Intelligence in Manufacturing”, significantly higher numbers are found in the US, followed by the EU and Japan. However, looking at the overall numbers can be misleading as Event Registry, which was developed and is maintained in Europe, is more focused on Western media sources.

For this reason, the percentage of all articles in which the terms “artificial intelligence” and “manufacturing” are used separately was examined. The result is opposite to the overall figures, as the relative coverage is significantly higher in Japan, followed by the US and the EU.

In summary, “AI in manufacturing” does not enjoy the same attention in Japan, the EU, and the US.

Internet of Things and Automotive Industry

In addition, the JSI examined which sub-topics of “artificial intelligence” and “manufacturing” are most prevalent in the news. Interestingly, the Internet of Things seems to be the most popular AI subtheme in the EU and Japan, while the machine learning subtopic seems to be the most popular in the US. It should be noted that “robotics” is much more popular in Japan than in the EU and the US.

In addition, “automotive” is the most popular sub-topic in “manufacturing”. “It is interesting to note that this theme is three times more common in Japan than in the EU or the U.S. In addition, the results show that the issue of “Industry 4.0” is significantly more popular in the EU, which is most likely due to the emphasis on this topic on the website European Commission.

Percentages of articles on AI in the industry for each country that refer to different industry topics.

How is the subject addressed?

To find out the tone of articles on the topic of “AI in manufacturing,” JSI conducted a sentiment analysis. Overall, the topic was addressed with mostly positive sentiment. Most of the negative opinions were found in the news that dealt with the trade war between the US and China. On the other hand, in Japan, there is a lower percentage of very positive articles, but a much higher percentage of mostly positive news. One of the explanations for this could be that the topic of AI in manufacturing is already well established in the Japanese industry, so they are less excited to report on it because it is less new.

Sentiment analysis of articles from Japan

Sentiment analysis of articles from the EU

Sentiment analysis of articles from the US

To conclude, “AI in manufacturing” is relatively more popular in Japan following by the US and EU. However, if the total number of articles is counted, US the takes first place. Internet of Things is the most popular subtopic of AI in the EU and Japan, while machine learning takes first place in the USA. The automotive industry is the most popular in all the three countries, while it is three times more popular in Japan than in the EU and USA. Interestingly, robotics is significantly more popular in Japan than in comparison to the EU and the USA. Overall, the subject of “AI in manufacturing” enjoys a mostly positive tone in the news of the countries under consideration. For final results, follow the EU-Japan project at https://project.eu-japan.ai/ and our social media.

“AI in manufacturing” resonating in the academia

Mapping the Application of AI to Manufacturing

“AI in manufacturing” resonating in the news

“AI in manufacturing” resonating in the academia

Prev Next 1 of 5
Categories