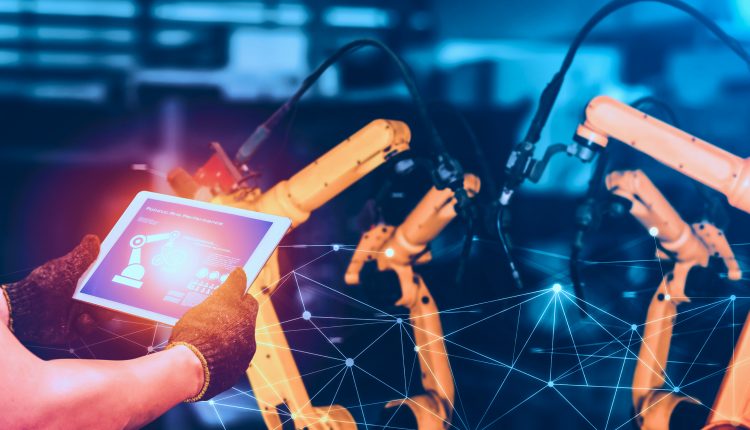 How the factory of the future works

The car factory of the future. A light-flooded hall the size of 30 soccer fields. 400 driverless transport vehicles bring drives, bodies, and vehicle parts to their processing location. The cars are built to order. It doesn’t matter whether it’s a sedan, SUV, or compact car. With the help of overhead rotary conveyors, push platforms, and robots, employees heave vehicle parts into optimal working positions. Everything is connected to everything else. Machines, systems, vehicles, and, via data glasses or tablets, people as well. A high-performance network of WLAN and 5G mobile communications ensures that all data benefits the manufacturer’s entire value chain. “Factory 56” is the name Daimler has given to its concept of a car factory of the future, which is to be gradually transferred to all Mercedes-Benz passenger car plants.

Industry 4.0 – An idea from Saarland

When machines, devices, sensors, and people are connected, we talk about the fourth industrial revolution, or “Industry 4.0” for short. A German success story. To which the Saarland has contributed important chapters. This is because it is home to a rare combination of excellent companies and research institutions with expertise in the areas of hardware, software, and connectivity – in other words, the key drivers for the realization of Industry 4.0 concepts. So it’s hardly surprising that the idea for the term came from a man from the Saarland. Wolfgang Wahlster first brought it to public attention at the Hannover Messe 2011 with physicists Henning Kagermann and Wolf-Dieter Lukas. “When the Internet comes to factories, we will have cyber-physical systems,” says Wahlster, who was director of the German Research Center for Artificial Intelligence (DFKI) in Saarbrücken until 2019. “But it was clear to us that we needed something more catchy, even though cyber-physical production is technically correct.” Thus was born the term “Industry 4.0,” which is now often spelled with an “ie” in international publications as well. An indication that you don’t have to copy Silicon Valley to succeed in the digital era. “Our approach was to bring centers of technological research very close to industrial ecosystems,” says Wahlster, a world-renowned expert on industrial artificial intelligence. “Saarland is a manufacturing and automotive state. So it makes perfect sense to focus intensively on industrial artificial intelligence there now.” Especially since the distances between industrial production, science, and political decision-makers in the small Saarland are shorter than anywhere else in Germany.

Through the interaction of data streams in real-time, Industry 4.0 is entering a new phase – combined with fast 5G networks, optimized with artificial intelligence (AI). Robots learn work steps in environments that correspond to their future real-life workplaces. With the “Center for Mechatronics and Automation Technology” (ZeMA), Saarland has an ideal test field for such applications. Airbus, VW, Bosch, Festo, and other industrial giants have already made use of its expertise.

Anyone entering the hall in Saarbrücken hears the whirring of drones. In an area secured by nets, the flying machines buzz above industrial robots working together with human colleagues in a workshop. “Robots sometimes move in ways that humans don’t expect at the moment,” says Tim Schwartz, who works on cognitive assistance systems at DFKI. “But a human shouldn’t be threatened, shouldn’t even feel that way.” Data from the drone’s camera ensured that the robot would detect the proximity of a human and stop its movement even before contact was made. “The robot’s neural network is connected to the camera image the whole time,” Schwartz says.

A pioneering test. Modern lightweight robots do stop when the opposing force becomes too great, thanks to their intrinsic sensor technology. “But that’s not collision avoidance,” Schwartz says. “At that point, there’s usually already a crash.” The solution could be a robot that stops before that happens, such as Bosch’s APAS.

Previous industrial deployments have shown that humans, with their sensory and cognitive abilities, can still adapt to new environments and tasks faster than robots, says Rainer Müller, ZeMA’s scientific director. “Humans are still superior to technical systems when it comes to perceiving and anticipating situations, as also shown by the challenges of introducing autonomous driving vehicles on the road.” According to Müller, when AI technologies evaluate data and recommendations for action can be derived from it, the expertise of engineers will also be needed in the future to question these recommendations and possibly make divergent decisions.

After all, artificial intelligence should drive individualized production without excluding humans. For Antonio Krüger, CEO of the DFKI, it is the central factor for the success of Industrie 4.0. “AI enables the price-competitive production of one-off or very small series for individual customers.” AI helps in making supply chains more flexible, in quality assurance, and in conserving resources and recycling, he said.

Cobots, i.e. robots that work hand in hand with humans, are seen as paving the way for flexible production all the way to “Losgröße 1” – a comprehensive individualization of production that is already a reality in the automotive industry. The wealth of variants in every model means that soon almost every car will be unique.

Volkswagen teams up with Microsoft to develop autonomous driving system